The transition of golf swing is like the second step of walk: the most weight of the body has been on the right leg and created an unbalance of the body during the first step — on this condition, you have to move the left leg forward to land on the ground.  For golf swing, you have created the potential energy and the unbalance of the body structure at end of the backswing, then just use this potential energy to transit the body weight to the left leg — feel the lower body falling down to the left. You don’t have to apply the other force like pushing the right leg to move the body weight laterally to the left leg.

How to shift the body weight to the left leg during the transition? Not the lateral slide, because the lateral moving will waste the energy of the right leg. Actually just naturally  move the core weight from right hip to left hip about one foot during the transition of golf swing. You can see and feel this action by watching golf swings by Bobby Jones and Sergio Garcia.

Of course, to create the potential energy, you have to complete the backswing well: make most body weight on the right foot by turning around the spine during backswing. Bear in mind: the transition is the process of the core body’s weight being moved naturally from right leg to left leg.

We all know two true facts during the transition: the head is stable at the center and at least half of the core weight is transferred to the left leg from the right leg. So from the view of geometry, the spine rotates an angle from one position to the other one around one end point of the head:  the line of head-right hip to the line of head-left hip. If understanding this action, it will be a key concept for creating more elastic force in the torso, taking more pulling force by the lower body and keeping better balance of the whole body. (See more at Chapter 9: swing direction — vertical with spine).

2. Downswing: just return back of the torso

Imagine a wave in the ocean swelling, rising, and for a moment standing there, and then falling down with its full potential energy. That wave is being supported from the ocean and from within itself. It is similar for golf swing, the whole body is full of elastic force during the transition, and you have to let the torso turn back naturally like the spring as you can not hold the twist power — this is beginning of downswing;  the arms & club are along with the torso’s turning together, and get the highest club head speed at the impact ( the wave down to level).

“As a matter of fact, there is no question that the long-hitters twist the hips through quite an arc and they actually do so with a great deal of effort. I don’t know how to describe it better than to say it is a powerful wrench of the body.

I have the feeling when playing well that during the first part of the downstroke I am pulling against something. There really is nothing to pull against except the tension in my own muscles—there is another dangerous word, but there is no other that fits—set up by the effort of the stroke.”  —by Bobby Jones

“ You must feel that instead of moving the right shoulder first, your arms should swing down into this gap and your back should stay turned to the target . To you it will feel as though you are liable to hit the ball a long way to the right, which indeed might well happen initially, but do not worry about that for the moment. Instead, concentrate on pulling down with your left arm, without your shoulders turning back. This, of course, will not be what is happening, but remember that until now your shoulders have been far too active at this point, and so you must feel that the start of the downswing has no shoulder motion at all. In clock face terms, you will now be able to swing the club down more from the 4 o’clock, rather than 2 o’clock, direction.”  — By Jack Nicklaus

3. Feel pulling force at the scapular during impact zone

The scapulars are not talked about more than the shoulders and arms for actions of the golf swing, but the scapular is really crucial as the pelvic for many sports like deadlift,  golf and baseball. 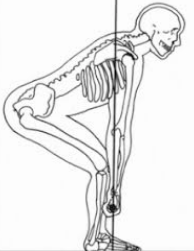