Backswing is for restoring the twisted power for the downswing; however the twisted power comes from the turning torso muscles around the spine and the right foot planted on the ground firmly to limit the upper body’s turn. So the key for backswing is the turning of the torso from lower spine to shoulders, instead of the action of arms and wrists.

Just like the left heel on the ground at impact and follow through, the right heel feeling the body weight at the setup and backswing is also very important. For more elastic force in the torso, the key action is the right knee and hip will work together with the heel against the upper body’s turning.

For golf, you’d better feel the weight on both heels at the setup. During the backswing with the upper body’s turning around the spine, the more body weight is gradually moved to the right foot because the torso’s turning basically on the right hip. Your right knee is bending and you will feel more pressure on both right knee and right ankle; as the twisted power is stored on the right leg and torso, you can feel the trend of transiting to turn back, just like the spring.

This natural trend is the moment of the beginning of the downswing. Just let the trend happen and follow it by letting the left heel on the ground. Then the both heels will work together to make the body turn back and add the downswing more. At the impact you’d better feel both heels on the ground and both knees bent a little to pull the arms and the club.

Actually then shoulders and arms are still moving back a bit when the core weight begins to move to the left hip and the left heel on the ground. This is the best way to make the spring power using the lower body.

Why do many beginners lift their heads up or to the right?  I guess the reason is they are taught to lift the club up with arms, and the arms will pull the neck and head to the right and up. And doing this way, the  head is lifted about inches at the top position, that means many mistakes during the backswing.

How to solve this problem? The answer is easy: do not lift the club with your arms during the takeaway, instead let your torso, scapulars and shoulders turn around the spine to lift your arms and the club up.  To do this, bear in mind:

1. Make the head and neck as parts of the spine, that means the whole spine is an axle which should be stable;

2. Don’t worry about the positions of arms and the club at the top position, they can get the right place naturally;

3. Right foot on the ground firmly and the right leg is the base of supporting the spine. Do not destroy this power base by too much turning.

Jack Nicklaus:  “Once you start the backswing make sure you complete it. Without a complete backswing you lose your potential for power and accuracy. Through a great majority of the rounds of golf I played my golfing career, one thought has really dominated my thinking and that is completely backswing. Why do I want to complete the backswing and why it is so important? The two elements in the Golf swing which we’re all trying to achieve are power and accuracy. As we complete the backswing we have a chance to deliver both of these simultaneously at the Golf ball and at the time of impact. ” Explained by SGM: you will restore the maximum of elastic force in your back muscles as you complete the turning torso during backswing. If the turning torso is not complete, the torso’s turning back will be too weak to lead  the shoulders to swing the arms and club, on the condition the arms may have to control the club to hit the ball by it’s own way — lose both  power and direction.

Basically the backswing is about the torso turning around the spine, not lifting the club by shoulders and arms; if the head is moving up, the spine position is moved and the arms and the club will lose the right direction. Correct sequence: the torso’s rotation leads the movement of arms, can not be reversed.

You can control the lifting head up by turning the left shoulder down and right shoulder up with the chest upward from the beginning of the backswing. Of course, by this way you can not turn around the spine a lot and feel stretched muscles and resist force in the torso. We do not care about how much you can turn, you just rotate your torso around the spine to the limited position which depends on the flexibility of your upper body and strength of your lower body — keep in mind, doing this way is for restoring more elastic for in torso, not for the positions of arms and the club. 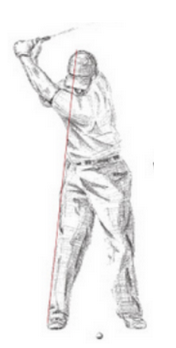